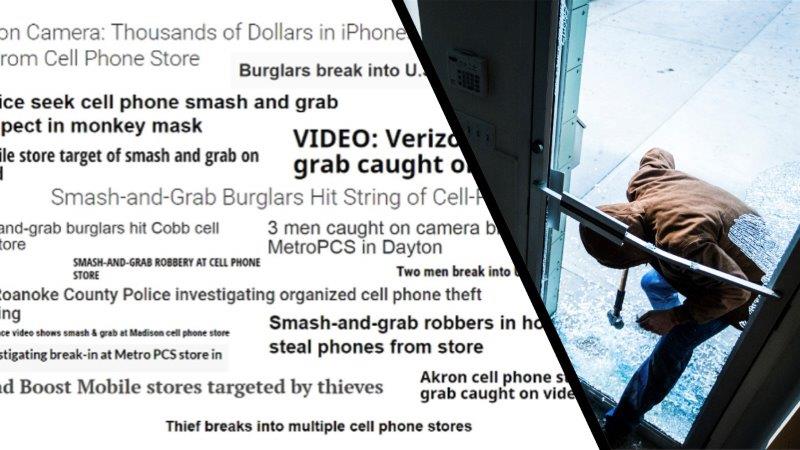 All retail stores need to have proper security. However, for some types of stores, this becomes much more important. Mobile phone stores are one of these businesses. The reason why is because these stores are frequent targets for criminals. There are many causes of this, including:

As you can see, there are several reasons why criminals target mobile phone stores. This is why it’s critical for businesses to protect themselves.

How to Secure your Mobile Phone Retail Store

One of the best ways to protect a business is to place a physical barrier in between criminals and your property. One of the most common crimes that happens at mobile phone stores is the smash and grab robbery. These crimes are successful because they do not require special tools (criminals often commit smash and grabs with baseball bats, rocks, or crowbars), they do not take long (most smash and grab robberies are over in a matter of minutes), and because criminals can quickly carry away merchandise and leave the scene before police arrive.

Installing physical security gates makes it significantly more difficult for a criminal to gain access to a property. Gates can protect storefronts that face the street, retail stores inside shopping malls, and even kiosks. By installing security gates, you are taking away the speed and convenience that a smash and grab robber needs to successfully commit a crime. However, gates can easily be folded or rolled out of the way during business hours, so your store always looks inviting to customers, but intimidating to criminals after hours.

Don’t wait until you’ve already been the victim of a crime to secure your business. Many business owners think that security is prohibitively expensive, so they avoid doing it until it’s too late. However, the cost of installing physical security gates at your business is often much lower than the losses suffered by a business that is a victim of a smash and grab robbery. Not only can thousands of dollars of merchandise be stolen in a manner of minutes, but the physical damage to a property can be significant as well. In fact, in many smash and grabs, it’s costlier for a business to repair their property than it is to replace the stolen goods. Plus, serious damage could result in a business having to close for some time so that repairs can be completed.

Rather than risk a crime taking place, consider installing strong physical security tools before you become a victim. Not only do physical gates make it more difficult to break into a mobile phone store, but they also deter criminals from considering your business to be a target.

How Hallway Gate Technology Keeps People Safe Hallway gate technology can be used to restrict access within a property. These tools let you block off a portion of a building quickly and easily, which keeps intruders out and prevents anyone from entering a sensitive or restricted area (either on purpose or by accident). Hallway gate…

Protecting Retail Assets with Security Cages Security cages provide effective and affordable security for retail stores and other properties, allowing you to protect merchandise, inventory, and other assets. These physical tools make it easy to secure items and keep them out of the hands of criminals, but still convenient for authorized persons to access them…

How to Pick the Right Security Gates for your Business One of the best ways to keep a business safe is by using security gates. Physical security makes it significantly more difficult – and much more time-consuming – for someone to break into a property. This is important because many robberies are what are called…

All Business Owners Should Be Aware of These Security Flaws Business security is important. Many business owners spend a lot of time worrying about security flaws and taking steps to protect their businesses. This makes sense. Theft, vandalism, and other crimes cost businesses millions of dollars each year. The financial losses associated with these crimes…