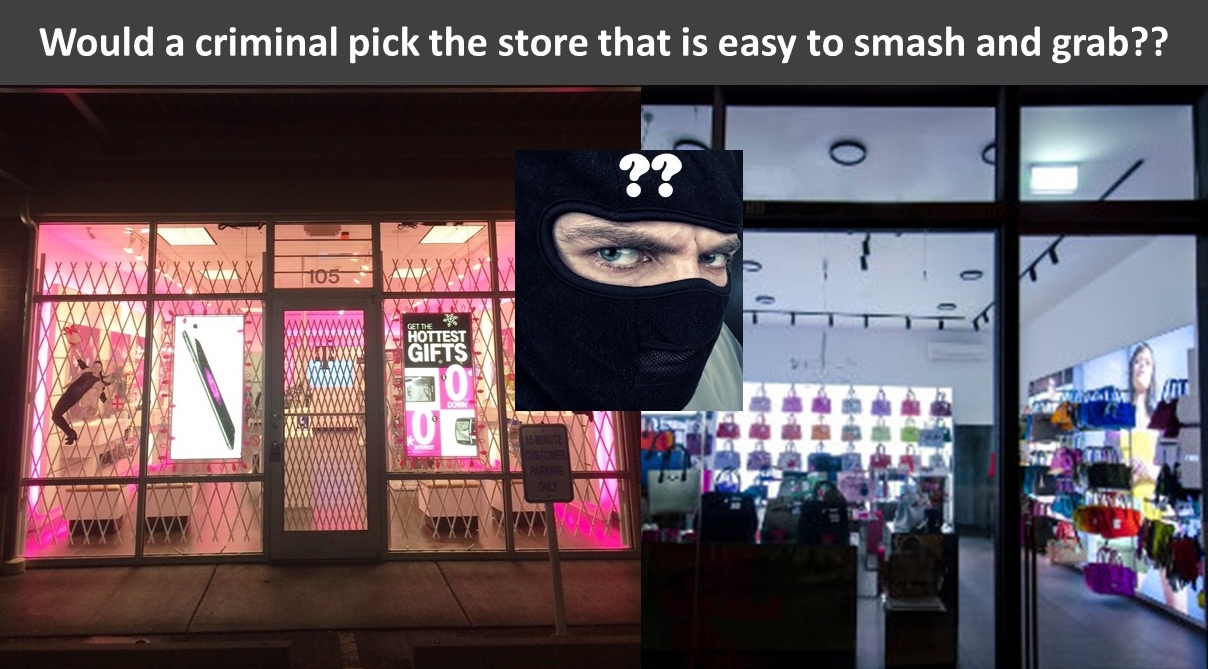 One of the best ways to protect your property is to try to understand criminals. When you have an idea how criminals think, this can help you determine what they look for in a target, and then you can use this knowledge to take action and make your property less of an obvious target.

Physical security gates are one of the most effective ways to reduce crime. To understand why, it’s important to consider what criminals think when they see a property that is protected by security gates.

Criminals want to get in and out of a property as quickly as possible. This is a major reason why smash and grab robberies are so common. Criminals know that it takes time for the police to arrive at the scene of a crime, so they make it their goal to get into a building, steal what they can, and get out quickly.

When a criminal sees a security gate, they know that it will take much longer to access a property. Breaking through a window or a glass door takes only a second or two. Breaking through a security gate is much more difficult and time consuming. The longer a criminal remains on the scene, the more likely they are to be caught in the act. Criminals, obviously, do not want to be caught committing a crime.

Criminals also often rely on crude tools to break through doors and windows. Most of the time, they use bricks, rocks, baseball bats, and crowbars. These tools are effective at smashing through glass, but they’re not nearly as effective when it comes to breaking through security gates.

Most criminals don’t come prepared with a wide variety of complicated tools that are bulky and difficult to use. When they see a security gate, they know that the baseball bat they’re holding won’t be enough to help them break into a property. They would much rather try their luck at a different location where gates are not in place.

In the vast majority of cases, criminals avoid properties that have security gates installed. They know that it will take time and considerable effort to deal with the security gates that are in place, and they also know that their efforts will most likely be fruitless no matter how hard they try. They recognize that all they’ll be doing is wasting time and energy, while simultaneously increasing the likelihood of being caught in the act.

That’s why security gates are so important. Not only do they put a physical barrier between criminals and your property, but they also serve as a strong visual deterrent. When a criminal sees a property that is protected with security gates, they immediately know that the gates are in place. Compare this to window film, which may also help protect windows from criminals. While window film can be effective, it’s not obvious that it is even there. Criminals likely won’t realize that it’s in place until they’ve already made several attempts to break in. This can cause serious damage to your property.

Stop Holiday Season Shoplifters The holiday season is a busy time for retail stores. There are increased sales during this time, and that means there are more people inside shopping malls and stores than there are during the rest of the year. This is good for business but, unfortunately, that also means there are more…

Office Security for the Holidays The holiday season is rapidly approaching and that means we’re getting to a very busy time of the year. In many offices, more and more people take time off or spend time celebrating and having fun at work. Unfortunately, criminals often take advantage of these opportunities and commit crimes during…

Being Organized Keeps your Retail Store Safe Retail store owners are always looking for ways to keep their stores safe and secure, and with good reason. After all, retail crime costs businesses millions of dollars each year and losses due to crime are one of the major reasons that retail stores go out of business….

The Importance of having Security Gates as well as an Alarm System One of the most common thoughts that we hear from people is why do you need physical security when you already have an alarm system? After all, your alarm is designed to contact the police directly as soon as a crime takes place,…

Keeping a Business Safe and Looking Great One primary concern that many business owners have is the worry that adding security tools to their business will make it look unwelcoming to customers. Businesses, from retail stores to offices, want to be inviting and they don’t want to scare potential customers off with imposing security or…