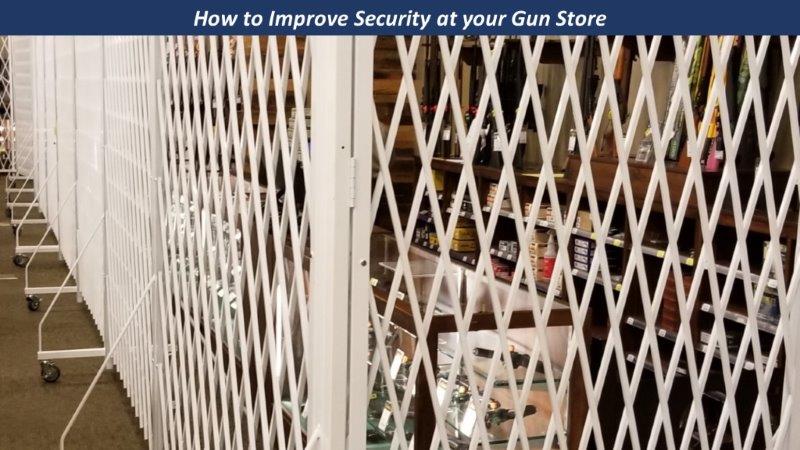 How to Improve Security at your Gun Store

Every business owner wants to protect their property from criminals. Unfortunately, there are some businesses that are more common targets for criminals than others. One of these common targets is gun stores.

There are many reasons why gun stores are frequently struck by criminals. One of the primary reasons is guns can be sold very quickly on the black market at high prices. Criminals know that if they are able to steal guns or other weapons, that they can almost certainly find a buyer for them very quickly.

Criminals also target gun shops in hopes of stealing guns and ammunition that they can then use in other crimes. If they can steal guns, they know that there will be no record of the purchase and no way to track any guns used in a crime to them.

For these reasons, it’s very important that gun stores have effective security installed.

Criminals know that, even if an alarm system is designed to immediately contact the police as soon as the property is breached, it takes time for security guards and police officers to arrive. If the robbers can leave the scene quickly with their stolen goods, the chances of them being caught are very low. Even if your gun store has security cameras installed, criminals can easily conceal their identities by wearing hoods, masks, or scarves. This makes it almost impossible for police to identify those who committed the crime.

For these reasons, it’s critical that gun store owners have physical security tools – such as security gates – installed at their property.

Security gates put a strong and visible barrier in between your property and criminals who wish to steal your assets and merchandise. This makes it significantly more difficult for a criminal to gain access. If a criminal sees that a gun store is protected by security gates, they know that it will be much tougher and more time-consuming to enter a property. The more time a criminal spends at the scene of a crime attempting a break-in, the more likely this criminal is to be caught in the act.

Criminals often avoid properties that are protected by physical security gates because they don’t want to take the risk of being caught.

Security gates can be installed on doors and windows and they can easily be rolled or folded out of the way during regular business hours. This ensures that your store retains its welcoming appearance during the day, but that it is secured at night.

Physical security gates can also be utilized inside a gun store, to restrict access to certain areas or to protect racks or displays that hold guns, bullets, and other merchandise. This drastically improves gun store security and keeps your business protected from criminals.

Smash and Grab Robberies Aren’t the Only Security Threat On this blog, we often spend time focusing on how to protect properties from smash and grab robberies. For many reasons, this makes sense. After all, smash and grabs are some of the most common crimes. They affect businesses of all types and sizes and in…

Protecting your Property from Smash and Grab Criminals Smash and grab robberies are crimes where someone smashes through a door or window and steals property from a business. These crimes are very common as they do not require specific tools or skills and they can be over in just a few minutes. Criminals often target…

Why Criminals Target Pharmacies Criminals want to be able to steal as many valuables as possible in the fastest time and with the least effort. This is why they often target pharmacies. Pharmacies contain a wide variety of items that are not only valuable to criminals, but also ones that can be carried from the…

Improving your Business Security This Winter The winter is definitely here and that means it’s time to start tackling winter security challenges. You may not think that security is any different in the winter than it is in the summer, but this certainly isn’t the case. Winter represents several unique challenges that need to be…

How Security Gates Deter Criminals Security gates don’t just make it more difficult for a thief to break into a property, but they also actively deter criminals from considering your property a target. This means that your store, office, warehouse or other location will be safer and your assets will be more secure. But why…