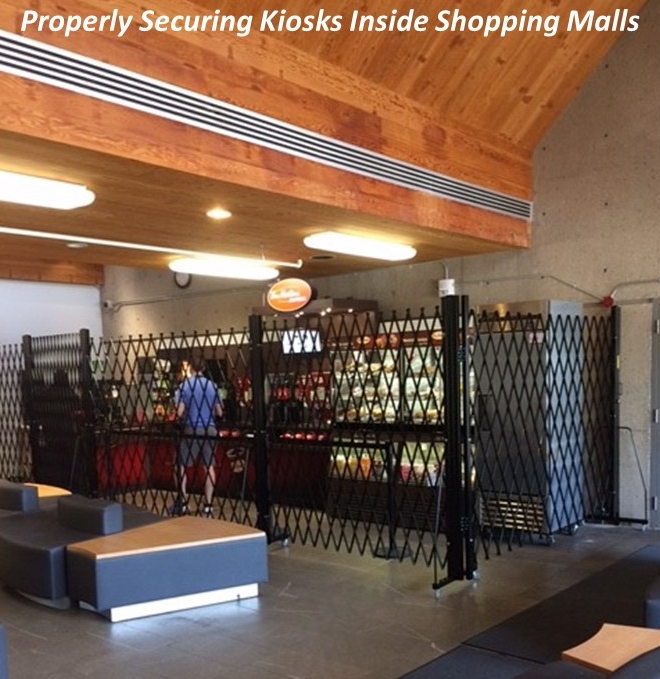 Mall kiosks are a very popular way for retailers to sell products and services. A kiosk inside a shopping mall has several advantages when compared to an actual store. First of all, kiosks can vary in size, allowing even smaller retailers to get the exposure they need in a large shopping mall without having to spend money on renting out an entire store.

In addition, in the age of online shopping, a retailer operating out of a kiosk is able to only have a small amount of merchandise on hand (which saves money) without the pressures of having to fill an entire store.

Kiosks are also popular with food and beverage retailers, such as coffee shops. Not only do they allow smaller independent retailers to establish a physical presence inside a shopping mall, but even larger chains often utilize kiosks to position themselves where foot traffic exists.

However, since kiosks differ in many ways from a traditional retail store, there are also different security concerns to keep in mind.

One major difference between a kiosk in a shopping mall and a traditional store is that a kiosk is exposed and open on all sides. This means that customers can access it from all sides and that those passing by can do so as well. To protect such a property, physical security is paramount. While there are no doors or walls in place to direct traffic or stop people, mobile security gates can be installed that ensure that all sides of the property are protected. These gates are easy to set up and locked when the business is closed and they provide a strong physical and visual deterrent.

Traditional alarm systems do not typically work well at kiosks, since there are no defined walls, doors or windows that can be breached, triggering an alarm. Criminals frequently target kiosks for this reason, as they know that there isn’t likely an alarm in place. Kiosks may not be watched over by security cameras either. However, criminals can easily see that security gates are locked in place. They know how effective physical security is, so they often avoid even attempting a crime when they see locked gates.

Due to their layout, kiosks are also often targets for shoplifters. As mentioned, they are accessible from all sides and angles, so it is sometimes difficult for staff to keep an eye on everyone around the shop. Shoplifters know this, and they take advantage of the situation to take items and slide them into their pockets or bags when no one is looking.

The solution is to use physical security to secure valuables. Small yet valuable items that are typically targeted by shoplifters can be placed in display cases that are secured or locked behind gates. If a customer wishes to access these items, they will need to ask store staff in able to do so. This drastically cuts down on shoplifting.

Properly securing a retail kiosk inside a shopping mall is crucial for many reasons. This is especially true for kiosks that may be open earlier than other stores in the mall (such as a coffee shop) as well as those that may be open later than the rest of the mall. Since the entire mall may not be open for business yet, mall security guards may not be on hand to watch out for criminals. Having physical security in place keeps your property safe.

Keeping a Business Safe and Looking Great One primary concern that many business owners have is the worry that adding security tools to their business will make it look unwelcoming to customers. Businesses, from retail stores to offices, want to be inviting and they don’t want to scare potential customers off with imposing security or…

Cell Phone Store Robbed Four Times in Four Weeks: How Similar Crimes can be Prevented Using Physical Security Products A mobile phone store in Orlando, Florida has been robbed four times in four weeks, despite the property having an alarm system and surveillance cameras installed. The Boost Mobile store in Orlando was robbed three times…

How Security Gates Improve Access Control Access control is important for any business. No matter what type of business you run, there will be areas where you do not want members of the general public to go. These could be areas that have sensitive information, they could stock rooms or other areas that contain assets…

Deter Criminals with Security Tools Unfortunately, smash and grab robberies can be quite common. Criminals often use the smash and grab tactic because it is quick and – generally – effective. They can break through a window or a door, steal what they’re looking for and get out of the location before anyone can react….

Improving your Business Security This Winter The winter is definitely here and that means it’s time to start tackling winter security challenges. You may not think that security is any different in the winter than it is in the summer, but this certainly isn’t the case. Winter represents several unique challenges that need to be…

How to Protect your Office from Criminals Owners of retail stores spend a lot of time working on improving security at their properties. However, retail stores aren’t the only locations that criminals target. Office buildings are also common targets for criminals. There are many reasons why. A lot of offices contain valuable electronics, such as…