Many business owners believe that installing security tools is required only to prevent merchandise from being stolen. While this is obviously one important part, it’s not the only reason to secure your business. Another crucial reason is because the property damage that occurs during a break-in is often very serious. This is true even for unsuccessful break-ins. In fact, it can be more costly to repair your property than it is to replace stolen merchandise.

This is because smash and grab robberies are often very violent and chaotic.

A smash and grab robbery is a crime where an individual or group attempts to break through doors and windows in order to gain access to a location. Once inside, the criminals aim to get as much out of the property as they can before the authorities can respond. Most smash and grab robberies are over within minutes. Some take just seconds to complete. Speed is crucial in these crimes because criminals want to get in and out of a location before the authorities arrive.

The truth is that, even if a business has an alarm system installed that immediately contacts the police as soon as a crime is detected, it still takes time for the police to respond. Criminals take advantage of this fact and leave the scene before anyone can get there to stop them. Alarm systems are not really a deterrent today.

Since smash and grab robbers are in a hurry to get in and out, they often damage a lot of property along the way. Often, the easiest way to gain access to a location and its merchandise is to break everything in your path. As you can assume, this can be very costly for the business. Even if nothing is stolen from the business, the cost to repair damage caused by a smash and grab robbery is significant.

In fact, many businesses need to temporarily close in order to make repairs to property that was damaged in a break-in, such as fixing doors and windows. Leaving the storefront with ply wood in place of the glass creating even a greater risk of a second attempt. This results in lost business and potentially negative publicity for your organization. Plus, there is also the time and hassle associated with arranging for the repairs, dealing with your insurance company, talking to police following the crime, and more.

In order to protect your business from the cost and hassle of a break-in, it’s important to install physical security tools such as fold away security gates. These tools don’t just protect your property, they also serve as visual crime deterrents. When criminals see that a property has security gates installed, they are significantly less likely to attempt a break-in. This is because physical gates put a barrier between your property and the criminal. This barrier makes smash and grab robberies much less effective and it becomes much more likely that a criminal will be caught in the act while trying to gain access to your location.

This is a major difference between security gates and other tools such as window film. While window film may also make it more difficult to gain access to a location, it does not serve as a visual deterrent. Therefore, a criminal may attempt to break in – and cause significant damage to your property in the process – before realizing that security tools are installed, leaving you with the need to replace the window and film again and again. Rather than take this risk, it’s a good idea to install physical fold away security gates that will also deter criminals and save your business money.

The importance of retail store access control and how physical security gates help. The Importance of Access Control at Retail Stores Retail stores have many security considerations to keep in mind. One of the most important – and unfortunately one that is sometimes overlooked – is access control. Controlling access within a store is critical…

How Storefront Security Gates Keep your Property Safe and Save Money When many business owners think of security, they think of the additional expenses associated with installing security tools. And, yes, security tools do cost money to install. However, when it comes to storefront security gates, not only is this cost definitely worth it, but… 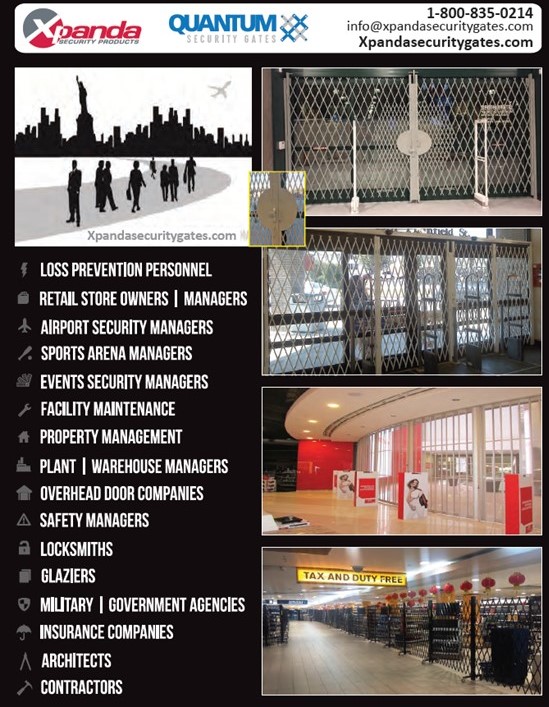 New Guide Explains How Strong Visual and Physical Protection is Crucial for After-Hours Security Xpanda is a North American leader in the manufacture, supply, and installation of security gates and related products. With 24 years of experience at keeping businesses of all sizes and types secure, Xpanda’s mission is to provide the best protection for…

Security Tips Inspired by The Fall  It’s the fall and that means it’s back to school time! For parents, that means getting used to new routines, rushing around to adapt to new schedules, and making sure everyone wakes up on time. However, even if you’re not a parent of a school-aged child, there are still…

How Security Gates Improve Your Brand One of the most important things that you can do as a business owner is instill trust in your brand and your company. Customers want to know that they are doing business with an organization that takes precautions to ensure that the business, its assets and its confidential information…

Protecting Retail Assets with Security Cages Security cages provide effective and affordable security for retail stores and other properties, allowing you to protect merchandise, inventory, and other assets. These physical tools make it easy to secure items and keep them out of the hands of criminals, but still convenient for authorized persons to access them…