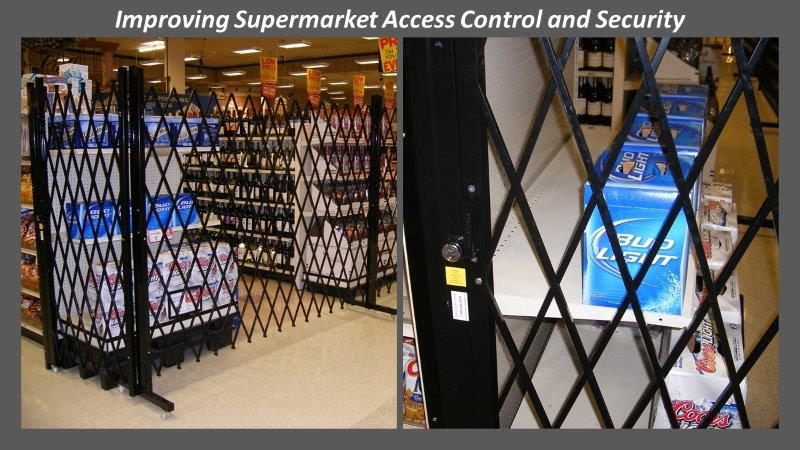 Supermarkets need security for many reasons. First of all, like any area that is open to the public, security and access control is crucial to ensure that everyone is safe and orderly. In addition, security tools are required to protect against smash and grab robbers, shoplifters, and other criminals. However, one difference between supermarkets and other retail establishments is that large grocery stores often have sections that must be closed to the public during certain hours, while many of the stores themselves remain open 24/7.

For instance, many supermarkets sell medication, alcohol, and other items that are strictly regulated. In some cases, a store is not able to sell these items without an authorized person (such as a pharmacist or individual licensed to sell alcohol) on site. On those occasions when such a person is not available, supermarkets must restrict access to these items.

Another similar situation is in regions where alcohol or other items cannot be sold during certain hours. For instance, the law may only permit alcohol sales between 10am and 9pm, but a supermarket may be open to the public from 8am until midnight. In these cases, the store will be required to restrict access to areas or aisles that sell these products.

How Supermarkets Can Improve Security

An excellent way to improve the security and safety of a supermarket is by using physical security. Physical security, such as security gates, is effective because it restricts access with a strong visual barrier. This helps prevent crime and control access.

When criminals see physical security gates, they know that it will be difficult to break-in a property. This drastically reduces the likelihood of a smash and grab robbery. Criminals know how effective security gates are and they avoid properties that have them installed. Security gates also stop shoplifters. If you lock small yet valuable items behind security gates or in locked cabinets, shoplifters are not able to sneak these items into pockets or bags when no one is looking.

Security gates are significantly more effective at stopping crime and controlling access than other tools. While alarm systems alert police to a crime in progress, it’s important to remember that it takes police time to arrive. Even if they are contacted immediately when a crime occurs, many smash and grab robberies are over in minutes and some take only seconds. Criminals can easily leave the scene before police arrive.

Video surveillance cameras provide evidence that can be very useful to police and insurance companies. However, this is only helpful after the fact. These tools do not prevent crime and, since criminals can easily hide their faces with scarves or hoods, they often do not deter criminals either.

Physical security gates don’t just stop criminals, they also prevent unwanted access. You don’t need to have security guards on hand to stop people from entering restricted areas when you have security gates. Gates act as a strong physical barrier, letting everyone know that an area is off-limits and keeping your store compliant with local laws. By placing gates on aisles or in front of certain shelves, you can easily restrict access to these areas while allowing free movement throughout the rest of the store.

Preventing Crime with Visual Deterrents Criminals, obviously, don’t want to get caught in the act. They want to get in and out of a property without being noticed. This is a big reason why security gates are so effective, since they not only deter they slow criminals down and drastically increase the chances of them…

Smash and Grab Robberies and your Business A smash and grab robbery is pretty much what it sounds like.Criminals smash through doors or windows of a property, take the items that they’re looking for and leave the scene quickly. Smash and grab robbers use speed to their advantage. They know that it takes time for…

Mall Kiosk Security Tools Mall kiosks are a very popular way for retailers to sell products and services. A kiosk inside a shopping mall has several advantages when compared to an actual store. First of all, kiosks can vary in size, allowing even smaller retailers to get the exposure they need in a large shopping…